On the 22 May 2019, the Canadian Museum for Human Rights (CMHR) hosted a book launch for HREC Director of Education Valentina Kuryliw’s recent publication titled, Holodomor in Ukraine, The Genocidal Famine 1932-1933: Learning Materials for Teachers and Students. It was held in the main foyer outside of the gift shop between 4 and 6pm to some 80 attendees present, among them community leaders, teachers and one Holodomor survivor from the Winnipeg community.

The opening remarks were given by Dr. John Young, CEO of the Canadian Museum for Human Rights, who welcomed those present and reflected on the importance of teaching about genocide, the Holodomor, and its inclusion in the Museum exhibits. His Eminence Metropolitan Yurij Kalistchuk, of the Ukrainian Orthodox Church of Canada, spoke on this occasion as an old friend of Kuryliw’s, highlighting some of the various community projects that both of them had been involved in together and from his knowledge of the work Valentina has been doing in education in Ukraine and Canada over the past several decades. The Emcee for the occasion was Mireille Lamontagne, Education Director of the CMHR, who singled out VIPs in the audience, including: Joanne Lewandoski–President of the Manitoba Provincial Council of the Ukrainian Canadian Congress (UCC), Linda Connor–Social Studies Curriculum Consultant for Manitoba Education, Tony Taveres–Diversity and International Languages Consultant for Manitoba Education and Training, and Holodomor survivors and Winnipeg locals, Luba Semaniuk and Zena Dlugosz. 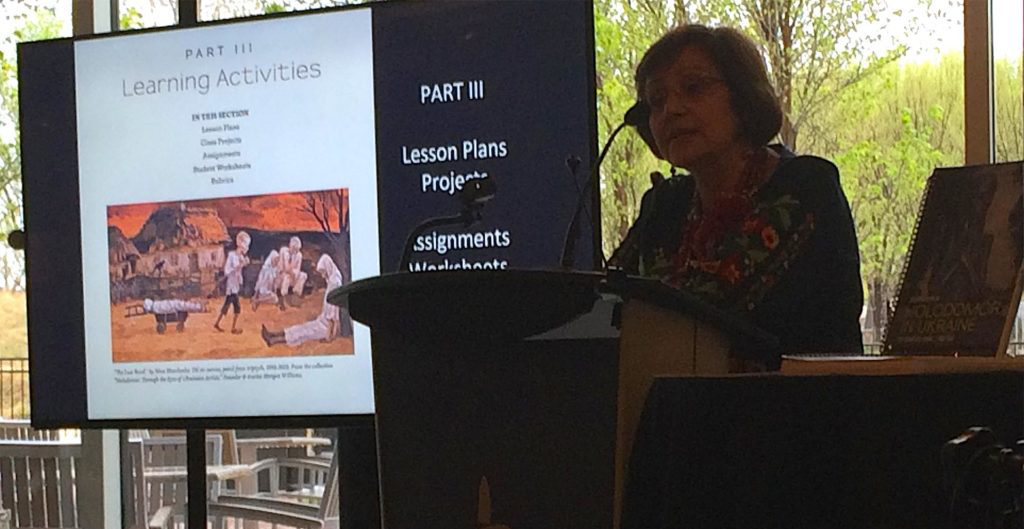 Valentina Kuryliw outlined her reasons for writing the book, as the daughter of two Holodomor survivors who grew up in a parish full of survivors whose activism influenced her deeply. She detailed the work she’d done to bring awareness to the Holodomor, for the Holodomor to be included in curricula in Canada, and to have current methodology and teaching strategies applied to all materials developed for teaching the Holodomor. Kuryliw outlined the organization of the book, showing samples of the various materials and lessons included with selected resources. Audience members later stated they enjoyed hearing her intertwine personal stories and family history into the narrative while she presented.

The presentation was well received with attendees asking interesting questions. The book launch concluded with the sale of books and book signing and a tea and coffee reception hosted by the Museum. The Museum staff were aided in organizing and promoting this event by the Holodomor Awareness and Education Committee of the Manitoba Provincial Council’s Val Noseworthy and Irka Balan. 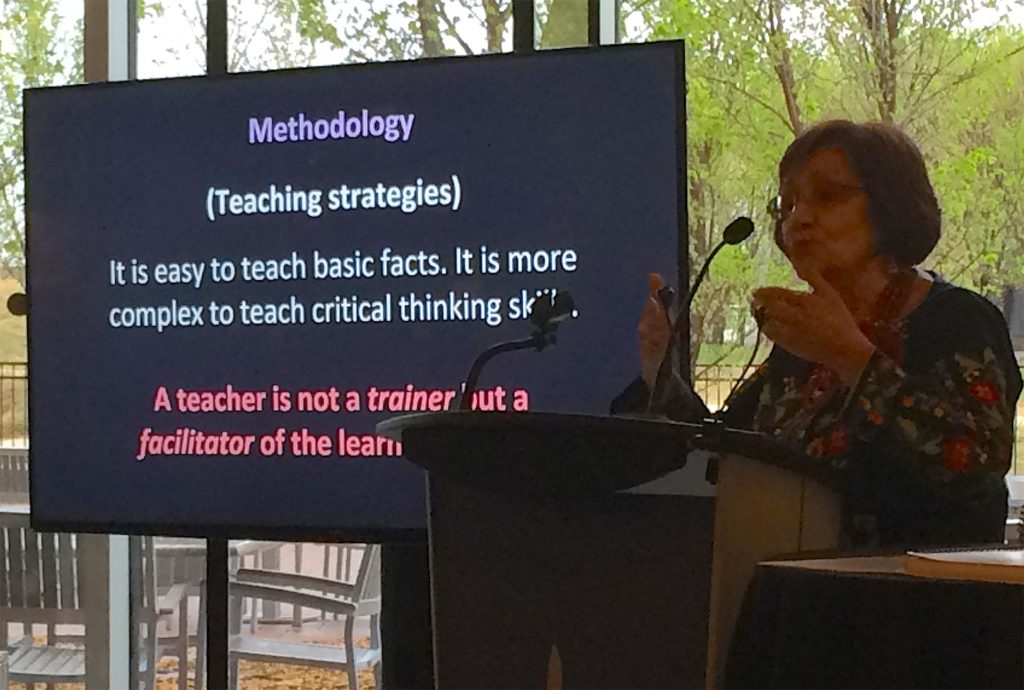 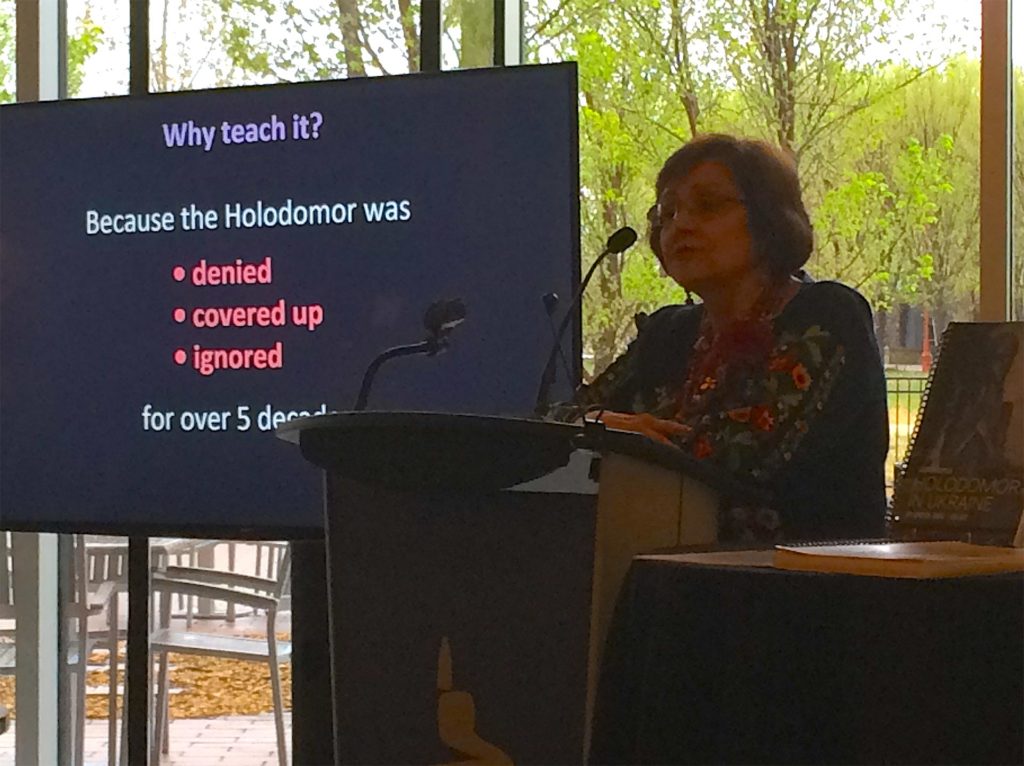 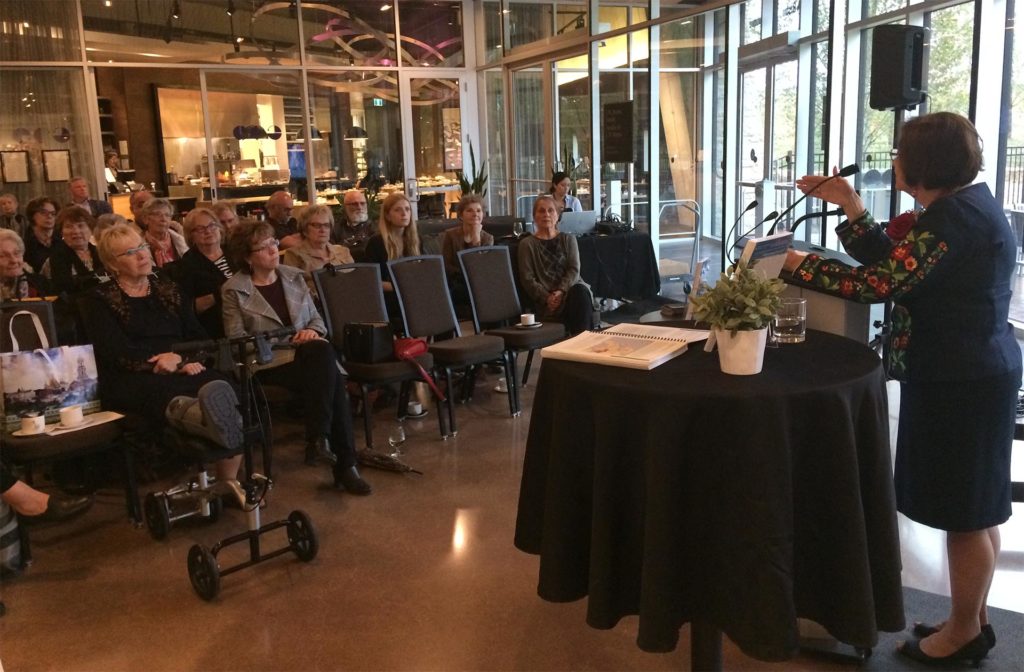 In addition, because of the book launch, CBC Manitoba Radio’s own host Ismaila Alfa interviewed Valentina Kuryliw about the Holodomor and her family for his Up to Speed show, which aired 22 May at 3:30pm in Winnipeg. Isamaila was well prepared and expressed interest in how and why a genocide like the Holodomor occurred and what affect it had on Kuryliw’s family as a whole.

The Holodomor Research and Education Consortium (HREC) is a part of the Canadian Institute for Ukrainian Studies (CIUS) at the University of Alberta. Kuryliw’s book, Holodomor in Ukraine, the Genocidal Famine 1932-1933: Learning Materials for Teachers and Students, is published by CIUS Press.

More information about the book and to purchase it.