In 2006, the newly created Ukrainian Government declared the Holodomor to be a genocide, perpetrated by the Soviet Regime against the Ukrainian people in 1932-1933. The Ukrainian government set up an annual national day of mourning on the fourth Saturday in November.

In 2008 the Canadian Government passed a decree recognizing the Holodomor as genocide, and established a day of commemoration on the fourth Saturday in November for the victims of the Ukrainian Genocide.

The Holodomor as Genocide, has been recognized by many governments including the United States Congress as the intentional genocidal policy by the Kremlin against the Ukrainian people.

Throughout Ontario, the fourth Saturday in November in each year is proclaimed Holodomor Memorial Day to memorialize those who perished as victims of genocide by famine that occurred in Ukraine from 1932 to 1933.

In 2014, Holodomor Memorial Day was commemorated in school across the country on either Friday, Nov 21st or Fir Nov 28th, 20014. A suggested announcement that could be read over the P.A follows this introduction along with a pamphlet for teachers. With basic information suggestions, resources and contact information.

Pictures from Past Holodomor Memorial Days 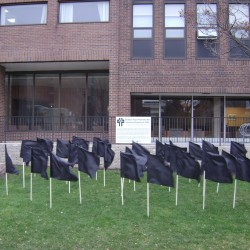 In Toronto, at St. Vladimir Institute on 620 Spadina Ave. an installation of 33 black flags are erected representing the year 1933. 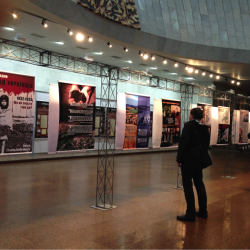 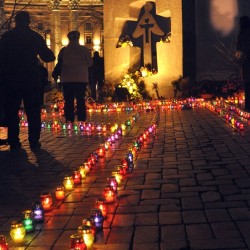 Kyiv Ukraine, Candle vigil in front of the first monument to the Holodomor in Kyiv – St. Michael’s square. 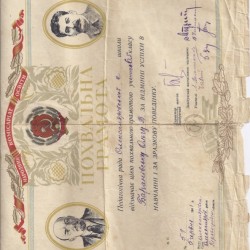 Student Report Card from the 1930’s in Kyiv
– Note the image of Stalin; the leader of the USSR on a random child’s report card. 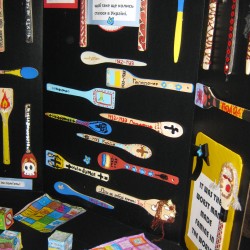 These are examples of art work done by students after learning about the Holodomor. Spoons and plates are used to represent the Genocidal Famine that the Ukrainian people suffered in 1932-33.

These are examples of art work done by students after learning about the Holodomor. Spoons and plates are used to represent the Genocidal Famine that the Ukrainian people suffered in 1932-33.