Holodomor education a tool to combat increasing divisiveness and hatred

What is the Holodomor?

In 1932-33, millions of Ukrainians were purposely starved to death by the Soviet regime led by Joseph Stalin. To break the back of “nationalist” resistance to Soviet power, an ancient nation was condemned to death by artificial famine. All grain and foodstuffs were forcibly seized. The territory of Soviet Ukraine and the predominantly Ukrainian-populated Kuban region of the Northern Caucasus (Soviet Russia) were isolated by armed units, so that people could not go in search of food to the neighbouring regions where it was more readily available. In little more than a year, one-quarter of the population of Soviet Ukraine perished. The result was the Ukrainian genocide of 1932-33, known in Ukrainian as the Holodomor (from holod – famine, and moryty – to kill). In November of each year, people world-wide honour the victims of this crime against humanity.

Facts about the Holodomor

In a time when significant numbers of Canadians reject the cultural differences that contribute so much to our society, it is vital that we examine the foundations and implications of such expressions.

Educators are uniquely situated to combat the increasing divisiveness and hatred fomented by these messages. Providing educators with opportunities to learn about relevant resources and teaching strategies is the mission of Social Studies Saskatchewan (SSS), the Saskatchewan Teachers Federation’s professional growth network serving the needs of the province’s history, law, psychology, and social studies teachers. The Social Studies Saskatchewan conference held last year in Moose Jaw, with its theme “Genocide: Then and Now”, was an excellent example of the work being done to counter the rise of hatred in Canadian society. 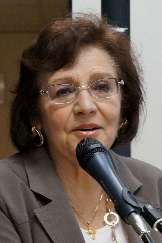 The conference began with a videoconference session by Valentina Kuryliw, Director of Education at the Holodomor Research and Education Consortium at the University of Alberta. Ms. Kuryliw spoke with the audience on the five stages of genocide, beginning with the stage pertinent to all teachers’ professional environment: bullying. By making links between genocide and something seen on a regular basis (bullying), Kuryliw effectively demonstrated how different regimes build upon existing human behaviors and tendencies to further their genocidal plans.

Teachers were also excited to receive a copy of Kuryliw’s new teaching resource: “Holodomor in Ukraine: The Genocidal Famine 1932-1933”, generously donated by the Ukrainian Catholic Brotherhood – Bishop Roborecki Branch. Kuryliw left teachers with not only a warning about the dangers existing in today’s social media-driven world, but also empowered them with the background knowledge and resources needed to fight these challenges. Importantly, she also left the teachers with the hope that we can be successful in preventing future genocides.

Making connections to personal experiences is important in any learning environment. During Kuryliw’s session, two participants spoke of their own connection with the Holodomor and education.

SSS President Robert Jardine related his experience in junior high school in Edmonton in 1979, where under the guidance of a dedicated social studies teacher, the student council created a petition supporting the creation of a Holodomor memorial to be placed near Edmonton City Hall.

Nadia Prokopchuk delved further into the Holodomor with a presentation using resources produced by Voices Into Action (www.voicesintoaction.ca). This was followed by Stephanie Danyluk sharing her work creating teaching materials to support learning about Dakota history, language, and culture. The Canadian Museum for Human Rights’ Lise Pinkos and Graham Lowes offered participants a look at the history of the institution and the philosophy guiding the work done by the curators and educational programming staff at the CMHR. The conference ended with an overview of professional development opportunities available to teachers, particularly those that support genocide education; Robert Jardine and Doug Panko led this session.

Feedback from participants indicates that they were very happy to learn from educational leaders about this vital theme, and were excited to return to their classrooms with new resources and strategies to meet the challenge of fighting divisiveness in Saskatchewan.

Saskatchewan honours the victims of the Ukrainian famine-genocide (Holodomor)

At 12 noon on Tuesday, November 19th, the annual provincial commemoration of the Holodomor Ukrainian Famine-Genocide will take place in the Rotunda of the Saskatchewan Legislative Building. This event is open to the public. The ceremony will be followed by a wreath laying at the “Bitter Memories of Childhood” monument southeast of the Legislative Building on Lakeshore Drive.

THIS STORY WAS PROVIDED BY THE UKRAINIAN CANADIAN CONGRESS-SPC FOR AWARENESS PURPOSES.