In May and early June HREC Education received consultation requests for interviews from a student in Shanghai, China, and a high school teacher in Brazil. Both found out about HREC, the Holodomor Research and Education Consortium at the Canadian Institute of Ukrainian Studies, University of Alberta, while researching the topic of the Holodomor.

In Shanghai, Kam Peiying is an 8th grade student, originally from Malaysia, who is currently at Shanghai High School International Division.

The International School largely follows an American curriculum, and Kam’s English teacher is Crockett Ford from the USA. The students have a project-based assessment which requires them to research a major historical event and examine how it impacted culture and people’s identities. She chose the Holodomor, because of her own interest in it and a desire to know more about its legacy. “It happened 80 years ago, but I think it’s effects must still be important today,” Peiying wrote. She added, “I want to interview someone with a direct connection to the event, like a survivor or their descendent, so that I can have a primary account of how the genocide affected Ukrainian people’s lives and worldview. I will include the interview in a short documentary I’m making for the project.” Peiying prepared excellent interview questions directed to a child of survivors and recorded her interview with HREC Director of Education Valentina Kuryliw, a child of two survivors, via Zoom. The documentary video she creates for her project will accompany a written paper. 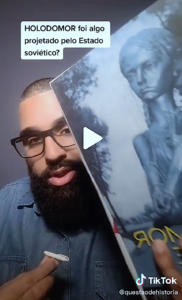 Dr. Higor Figueira Ferreira is a high school and post-graduation teacher/professor who lives in Rio de Janeiro, Brazil. He wrote, “My PhD is far from the Holodomor theme. I study slavery and educational experiences among black and brown people in nineteenth century Rio de Janeiro and, most recently, I have been studying and teaching about Africa to junior high and high school teachers to improve on this area of knowledge in our schools.” Ferreira also produces educational materials for the internet via Instagram (IG) and TikTok (@questaodehistoria) and has fully embraced these as a means by which to reach students and continue the discussion of his history topics. Indeed, he has well over 4k followers on IG and over 38.2k followers on TikTok, in which some of his videos regularly receive tens of thousands of views including one that has over 64k views and many hundreds of comments. Ferreira patiently replies to them all in Portuguese, fostering ongoing dialogue with diverse students of history and politics. His June 3rd TikTok announcement of his upcoming interview with Director of Education Valentina Kuryliw has already received over 3k views in one day of posting and over 400 “likes” and 89 comments. Many students in Brazil have been influenced by socialist thought and RT (Russia Today) television programs. Kuryliw will bring a very different point of view than what they mostly have access to in Brazil regarding Soviet and Russian government denial of the Holodomor and its causes. Among the student comments on Prof. Ferreira’s TikTok announcement of the upcoming interview with Kuryliw are feisty remarks about “rewriting history” and “revisionism” of the socialist view along with positive responses of: “This is what we need on TikTok.”