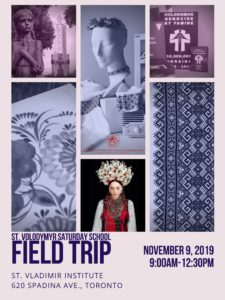 TORONTO, 9 November 2019 | During their annual field trip to St. Vladimir’s Institute to learn about the Holodomor for Holodomor Education Week in November, junior and senior level students with some of their parents, from St. Volodymyr Ukrainian School (401 College St. at Kensington Community School) learned how food was used as a weapon in the Holodomor.

Students began the day with molytva (prayer) in memory of victims of the Holodomor and sang the anthems of Ukraine and Canada, followed by a creative workshop with Oksana Pikush painting in the Petrykivka decorative style of the Dnipropetrovsk region – whose symbolism reflects spiritual harmony, unity and love of life.

After lunch, the class of seniors (grades 7-11) headed to the Ukrainian Canadian Research and Documentation Centre (UCRDC) upstairs for a presentation by long-time UCRDC Board member and educator Valentina Kuryliw. In her PowerPoint presentation, Kuryliw discussed the basic facts of the Holodomor with them and viewed a video interview with her as a child of Holodomor survivors created by the Saskatchewan Holodomor Awareness and Education Committee for FAST’s “Voices Into Action” educational series. The presentation and video contained photographs and family 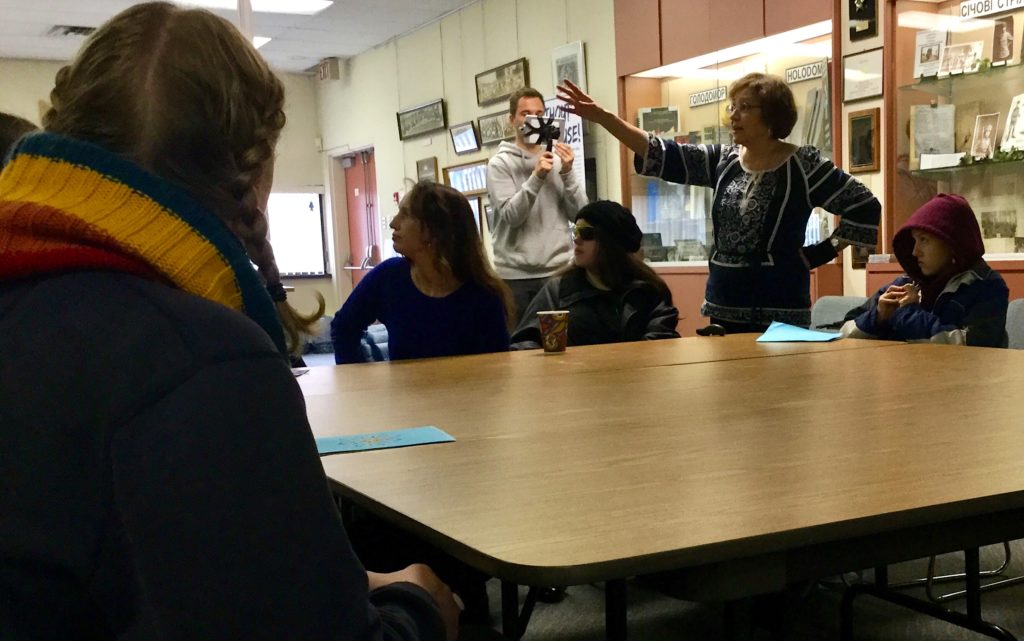 stories intertwined with the teaching of the historical facts, which created greater connection and empathy for the students. 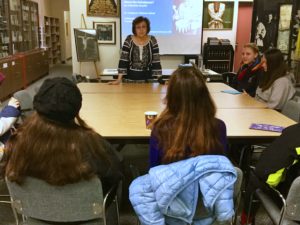 Valentina explained the role of the UCRDC Oral History Collection and what it means to interview Holodomor survivors and eyewitnesses and the importance of studying the recordings preserved in the archive. She also pointed out that the archives also interviewed the children of survivors and these interviews were done by Sophia Isajiw, who was assisting with the lesson. In responding to questions, the students showed a solid understanding of the value of oral history recordings and eyewitness accounts when studying the Holodomor as sources of research, amongst other resources researchers and historians use, to understand past events. 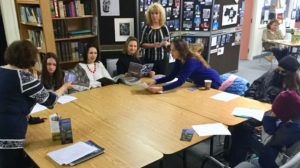 One of the students who understood the importance of interviewing several generations from the same family responded that the purpose was to study the legacy of “intergenerational trauma” that might be passed down. She is the granddaughter of Iwan Jemetz, and her mother was also present and participating in the lesson. Her grandfather Iwan was interviewed by Ariadna Ochrymowych and his son Alex Jemetz was interviewed by Sophia Isajiw; both interviews are in the UCRDC oral history archive collection. Because the students asked why Holodomor Memorial Day was not observed in their regular schools, Kuryliw discussed the importance of each student being an advocate in their day schools for Holodomor awareness and education and left them with Holodomor Memorial Day pamphlets to take to school to give to their teachers. A worksheet on the Holodomor was distributed for follow up with teachers and Principal Tanya Sunak. 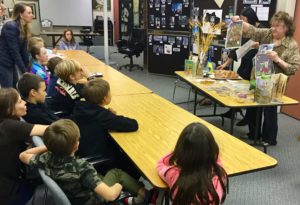 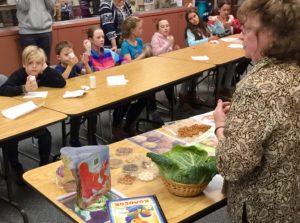 For the class of juniors, Kuryliw asked retired primary educator and the long-time creator and teacher of an innovative Holodomor lesson, Halia Dmytryshyn, to join her at UCRDC to work with the younger group. UCRDC was very quickly filled with the exuberant energy of a very well-behaved and eagerly interactive kindergarten-to-grade-6 group of students. Halia Dmytryshyn came well-prepared with many visual aids, round containers filled with various grains and seeds grown agriculturally, children’s story books, a truly enormous head of acabbage and many other objects for the children to look at and hold. As soon as the cabbage was uncovered, the children all exclaimed together as if on cue: “kapuuuustaaaaa!” She talked about the importance of food and the production of food and farming as a basic need in order to survive interspersed with some basic facts about the Holodomor. Halia then shared her famous “Bread and Butter” lesson with the school children which combines storytelling and reading from the Little Red Hen. Each child was given a tall glass spice container filled to one third with whipping cream. 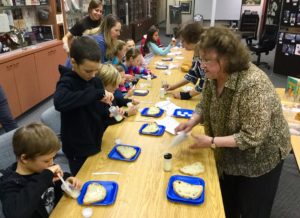 Reciting parts of the story with the teacher, students had to shake, shake, shake their cream hard to churn it into butter over the course of the story. It took a lot of work to shake the jar long and hard enough to make butter and separate the whey from the cream. By doing this in the context set by the teacher, the students were able to intrinsically understand the amount of labour needed in growing food on a farm. Once the butter was churned and the whey poured out, each student was given a slice of bread on a plate and buttered their bread with the butter they had just made. Together they stood up to say a prayer before eating and after the prayer sat down to eat. However, in a surprise move, assistants Svitlana Sheptytska, Valentina Kuryliw and Sophia Isajiw were instructed to very quickly whisk away the bread from the students and tell them they were forbidden to eat it. All of the children gasped at the injustice of having food forcibly taken away from those who produced it. Teacher Dmytryshyn explained that all foodstuffs were taken away from people during the Holodomor, including the fruit of their hard labour. She then asked whose labour made the butter. One girl cried out, “It was MY work!” inbetween bites of her bread and butter. In this way Halia introduced the younger children to basic facts of what happened during the Holodomor, leading to the starvation of millions. The buttered bread was returned to all the students who were happy to bite into it and enjoy their homemade butter!

Both lessons were presented using the Ukrainian and English languages to be inclusive of all students present. UCRDC technician Ruslan Bokiy facilitated all of the IT and technical aspects required throughout the day. It was a very productive half day for the students who were able to learn a lot about a special chapter of Ukrainian history.