Valentina Kuryliw an official honoree of the St. Volodymyr the Great Medal

TORONTO | The Holodomor Research and Education Consortium’s (HREC) Director of Education, who is also the Chair of the National Holodomor Education Committee (NHEC) of the Ukrainian Canadian Congress (UCC) Valentina Kuryliw, is an honoree of the Ukrainian World Congress’s (UWC) highest accolade – the St. Volodymyr the Great medal. The medal was introduced in 1988 to acknowledge individuals for their special and significant contributions to the development of the Ukrainian community in the diaspora and/or Ukraine.

Kuryliw was amongst 8 Canadians honoured “for a special contribution to promoting the image of the UWC, the development of Ukrainian community life in the diaspora, and support of Ukraine.”

She was honoured during the November 25 opening ceremony of the XI Ukrainian World Congress in Kyiv, Ukraine. In attendance were over 300 delegates and honoured guests representing 26 countries. Among them were the president and members of the Parliament of Ukraine and the primates of Ukrainian Churches. 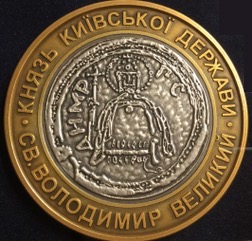 “The Ukrainian World Congress confers the St. Volodymyr the Great medal in recognition of an especially meritorious contribution in promoting Ukrainian heritage, identity and values, as well as for other significant endeavors,” outgoing UWC President Eugene Czolij stated.

Valentina Kuryliw was amongst 37 recipients from 15 countries of the 2018 medal, 8 of whom are Canadians. The Holodomor Research and Education Consortium (HREC) is proud that its Director of Education, Valentina Kuryliw, is recognized by this international body for a lifetime of work. The Ukrainian Canadian Congress nominated Kuryliw for the award to recognize her many years of tireless work and leadership in Canada and Ukraine as an ardent advocate for human rights and the teaching of the Holodomor in schools in Ontario and across Canada. With 35 years of teaching experience in Canadian schools, she has conducted teacher trainings and Holodomor workshops in Ukraine and Canada for 2 decades, striving always to teach human rights and the Holodomor using new and interactive methods to engage students to develop their critical and historical thinking skills.

Oksana Levytska, head of the National Ukrainian Education Committee of the Ukrainian Canadian Congress stated: “On behalf of members of the National Ukrainian Education Committee and myself, I congratulate you with the honorary award from the Ukrainian World Congress. There is no doubt that your contribution led to the development and professionalization of Ukrainian education in the world, especially the teaching of history and the Holodomor. Your initiative and support of educators certainly brought about great progress in the teaching of Ukrainian studies – especially in developing materials in teaching history in Canada in particular, and for the diaspora as a whole.”

Amongst those who received the award for significant contribution to the development and prosperity of Ukraine are Acting Minister of Health Ulyana Suprun (Ukraine), former Prime Minister of Canada Stephen Harper (Canada), Congressman and Member of the US House of Representatives Sander Levin (USA), and former US Senator John McCain posthumously (United States).

HREC heartily congratulates all of the very worthy recipients of UWC’s highest award.

The Holodomor Research and Education Consortium (HREC) is a project of the Canadian Institute of Ukrainian Studies at the University of Alberta, with its headquarters in Toronto.

The UWC is the international coordinating body for Ukrainian communities in the diaspora representing the interests of over 20 million Ukrainians. The UWC has member organizations in 33 countries and ties with Ukrainians in 14 additional countries. Founded in 1967 as a non-profit corporation, the UWC was recognized in 2003 by the United Nations Economic and Social Council as a non-governmental organization (NGO) with special consultative status.