The Victims of Communism Memorial Foundation hosted the 2020 National Seminar for Middle and High School Educators Professional Development Program in four 4-day cohorts, the last from July 22-25, from Washington, DC. Free to middle and high school teachers interested in teaching about the history of communism and its collectivist legacy, the National Seminar went fully online this summer for the first time due to the Covid-19 pandemic. I attended the fourth cohort and received a certificate for my participation. The program delivered streamlined teaching content and short discussions extremely efficiently, although online delivery unfortunately meant that trips to DC memorial monuments and activities for socializing and networking were not possible,.

The seminar confronts the ideology of communism, it’s history and legacy, by blending together scholarly lectures, pedagogical sessions and peer discussions to carefully balance content and teaching practices. Learning is reinforced powerfully in very valuable daily, personal stories and testimonials from witnesses, dissidents and victims of various communist countries, allowing time for questions from educators. 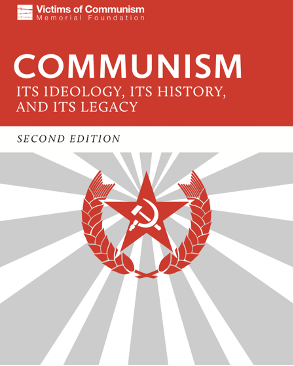 Studies consistently reveal that North American high school and college students do not know basic facts about the history of communism, and thus frequently celebrate communist personalities and graphic symbols by wearing them on clothing as seemingly cool subgroup emblems of equality and revolution. North American educational institutions have failed to successfully teach the most important lessons of the 20th century to new generations. Currently, 20 percent of the world’s population still lives under single-party communist dictatorships — more than did in 1989. Starting from this reference point, the Victims of Communism (VoC) National Seminar aims to equip teachers with possibilities for proven, sequenced learning about communist ideology and history, with historical facts regarding the character of totalitarian governmental systems and practices, with the economics, culture and politics of communist and post-communist countries and with the legacy and impact of communism in current affairs. VoC’s curriculum is based on its curricular supplement, Communism: Its Ideology, Its History, and Its Legacy, which was developed by Lee Edwards, Paul Kengor and Claire McCaffery Griffin, and has been applied in schools across the USA. In addition, participants receive a box full of course related books by faculty and others.

A number of esteemed faculty teach the seminar on a rotating basis. Each of them manages to nimbly cover a great deal of content under their topics in very succinct and direct ways. During the fourth cohort this summer, Gregory McBrayer (Ashland University, Ohio) contrasted the political 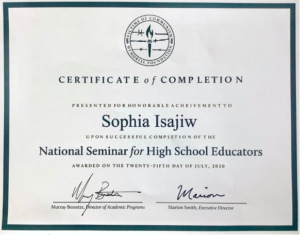 and economic thought of Adam Smith, John Locke and Karl Marx in regards to political power, property rights, human nature and laws of nature, equality and how each political thinker answers the question of why some nations who have vast resources are relatively poor and why other poor countries are relatively rich in their scientific or ideological writings. Jonathan Pidiuzny (Morehead State University, Kentucky and the Director of Academic Affairs, American Council of Trustees and Alumni) delved deeper into Lenin’s thoughts on the state and revolution in relation to Marx’s original intentions, because Lenin wanted to rehabilitate Marx from being read “too gently” in regards to what a communist state looks like, why it has to happen and why it has to be violent. Flagg Taylor (Skidmore College, NY and VoC Academic Council) concisely and compactly covered a deeper understanding of the core concepts of communism, the characteristics of totalitarianism and the use of ideology, the “laws of history,” and terror in these regimes, and the more accurate term ‘ideocracy,’ as well as the lessons of dissent. Elizabeth Spalding (Director of the Washington Program at Claremont McKenna College, Washington, DC) very deftly took educators through the Cold War and its framework concepts, approaches to use with students who are too young now to remember aspects of the Cold War, democide, détente, containment, the theme of freedom throughout and much more, including what works with students from her experience and where to quickly find key resources to demonstrate key concepts in class.

Pedagogical sessions were covered by Heather Miller and Kathleen Ouyang using VoC lesson plan examples that gave seminar educators a fun opportunity to work together on activities in break out rooms to understand the approach, methods and strategies in the lessons experientially. These activities were efficiently organized and very quickly got to the core of the lesson at hand in simple and direct ways. 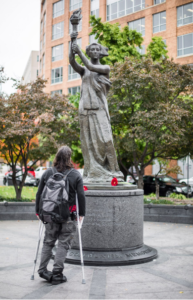 One of the seminar program’s greatest strengths is the opportunity, for educators, to listen and talk to a series of witnesses, survivors of communist countries from around the world. Witnesses give very valuable, vivid, devastating and wide range of examples of what every aspect of their daily lives under communism in their respective countries was like. The witness sessions ensure that the millions who suffer under communist regimes are not forgotten, and they really bring home the importance of testimony in education about the past. Each witness is an extremely credible, articulate and impassioned speaker who talked about how and the various reasons why communism took root in their country and what it did to their family life and people. Their sequential daily testimonies also vastly widen one’s perspective on how communism interrelates and operates globally. Witnesses included Merita McCormack (Albania), Lily Tang Williams(China), Orlando Luis Pardo Lazo (Cuba), Daniel Di Martino (Venezuela).

In addition, educators were treated to a lunchtime talk with sculptor Thomas Marsh who created the Victims of Communism Memorial (Washington, DC). Marsh shared the interesting story of his ideas behind the creation of the monument and historical references for the figure within it.

VoC founder, Marion Smith states, “When we don’t educate our youngest generations about the historical truth of 100 million victims murdered at the hands of communist regimes over the past century, we shouldn’t be surprised at their willingness to embrace Marxist ideas.” Therein lies the rub. “One hundred years after the Bolshevik revolution, one-fifth of the world still lives under single-party communist regimes.”

It is clear from the ongoing pop culture allure of Marxism that educational programs such as this are needed. VoC is trying to remedy this omission with thoughtful, accurate and insightful information in readily teachable formats. Their national seminar for high school educators is highly recommended because it helps to reframe one’s thinking about approaches to teaching the topic and puts ready resources and lesson plans into educators’ hands directly. In terms of Ukraine as a former Soviet country, although it is no longer under Communist rule since its independence in 1991, it would nonetheless be a valuable addition to the VoC’s excellent national seminar to add an expert witness, or even a child of Holodomor survivors, to speak to the legacy of the Ukrainian genocide perpetrated by Stalin’s regime in 1933-4, the long grip and legacy of Communism with which Ukraine’s fledgling democracy still struggles currently, and Communism’s ongoing repercussions on present-day Ukraine which are responsible for Russia’s current annexation of Crimea and invasion of eastern Ukraine.

Some helpful links about the seminar: