Edmonton, Alberta | January 10, 2019 – Olga Chassé, the third prize winner of the 2018 HREC Educator Prize for Holodomor Lesson Plan Development, took a cross-curricular approach to student learning about the Holodomor in the creation of her lesson plan which won her the prize. The lesson incorporates Social Studies, Fine Arts and English Language Arts curricular outcomes. Her lesson was developed for the grade 5 level and has as its aim to educate students about the history, meaning and importance of the Holodomor, and to engage them in discussions and activities that promote analytical, critical and creative thinking. 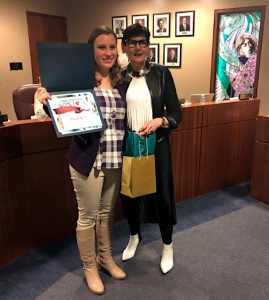 As a result of her lesson plan Prize win, Olga was invited to the Alberta Catholic School Trustees’Association (ACSTA) public meeting where she was recognized for her accomplishment and her contribution to education. District Superintendent Joan Carr presented Olga Chassé with the ACSTA’s Appreciation Award on November 27, 2018 (pictured together in photo at right).

After recognizing Chassé, Carr also stated at the meeting, “Moving forward, in order to align our District’s honouring of Canada’s Holodomor Memorial Day, which is the fourth Saturday of November, with educational activities that are occurring across the country, ECSD will now declare the fourth Friday in November as Holodomor Memorial Day in the Edmonton Catholic School District and insert this day in our District calendar in perpetuity.”

Additionally, Chassé’s Principal at St. Martin School, Angela Zapisocki wanted all of Olga’s colleagues to be able benefit from the winning lesson plan and has now had it added to the ecsd.net’s Holodomor resources. Principal Zapisocki announced: “This great lesson has been made available to all grade 5 teachers within Edmonton Catholic Schools for future use. Congratulations Olga!”

HREC Education welcomes Olga Chassé as a HREC Educator and congratulates her on the outstanding work she is doing contributing to the education and awareness of the Holodomor in Canada.

Look for Information about the 2019 HREC Educator Prize for Holodomor Lesson Plan Development, and its application form, which will be posted soon on the HREC Education website where you can also sign up for our newsletter and to receive information right to your email address, as well as on our social media Facebook page.

The Holodomor Research and Education Consortium (HREC) is a project of the Canadian Institute of Ukrainian Studies at the University of Alberta with offices in Edmonton and Toronto.