Raphael Lemkin, the United Nations Convention on the Prevention and Punishment of the Crime of Genocide and the Soviet Genocide in Ukraine 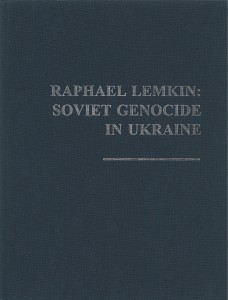 Raphael Lemkin (1900-1959) was an expert in international criminal law, with a particular interest in the prevention of mass human extermination. It was he who coined the term “genocide,” and many of his ideas were incorporated into the United Nations Convention on the Prevention and Punishment of Genocide in 1948.

In Article 2 of the present Convention, genocide is defined as any of the following acts committed with intent to destroy, in whole or in part, a national, ethnical, racial or religious group as such:

It should be noted that Lemkin, who developed the concept of “genocide,” applied it to the attempts to destroy the Ukrainian nation, not just Ukrainian farmers. As integral components of the same genocidal process, Lemkin speaks of it as having four prongs:

The only dimension missing in Lemkin’s excellent analysis is the destruction of the ethnic Ukrainians living in the Russian Republic (RSFSR), of which there were eight million on the eve of the genocide.

Raphael Lemkin’s full speech, which he presented in New York City at the 20th Commemoration of the Holodomor in 1953.
The speech explains why he considered the Holodomor to be a classic example of Soviet genocide.

Excerpts from “SOVIET GENOCIDE IN UKRAINE” 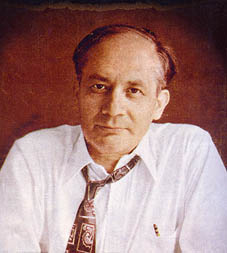 In his work History of Genocide (unpublished), Raphael Lemkin, a Polish-Jewish scholar, writes about the Soviet genocide in Ukraine. Following are excerpts from “Soviet Genocide in the Ukraine,” the last chapter of the book.

“What I want to speak about is perhaps the classic example of Soviet genocide, its longest and broadest experiment in Russification – the destruction of the Ukrainian nation.”

“As long as Ukraine retains its national unity, as long as its people continue to think of themselves as Ukrainians and to seek independence, so long Ukraine poses a serious threat to the very heart of Sovietism. It is no wonder that the Communist leaders have attached the greatest importance to the Russification of this independent [-minded] member of their “Union of Republics,” have determined to remake it to fit their pattern of one Russian nation. For the Ukrainian is not and has never been, a Russian. His culture, his temperament, his language, his religion – all are different.”

“Ukraine is highly susceptible to racial murder by select parts and so the Communist tactics there have not followed the pattern taken by the German attacks against the Jews. The nation is too populous to be exterminated completely with any efficiency. However, its leadership, religious, intellectual, political, its select and determining parts, are quite small and therefore easily eliminated, and so it is upon these groups particularly that the full force of the Soviet axe has fallen, with its familiar tools of mass murder, deportation and forced labor, exile and starvation.”

“The attack has manifested a systematic pattern, with the whole process repeated again and again to meet fresh outbursts of national spirit. The first blow is aimed at the intelligentsia, the national brain, so as to paralyze the rest of the body.”

“Going along with this attack on the intelligentsia was an offensive against the churches, priests and hierarchy, the “soul” of Ukraine. Between 1926 and 1932, the Ukrainian Orthodox Autocephalous Church, its Metropolitan (Lypkivsky) and 10,000 clergy were liquidated.”

“The third prong of the Soviet plan was aimed at the farmers, the large mass of independent peasants who are the repository of the tradition, folklore and music, the national language and literature, the national spirit, of Ukraine. The weapon used against this body is perhaps the most terrible of all – starvation. Between 1932 and 1933, five million Ukrainians starved to death, an inhumanity that the 73rd Congress decried on May 28, 1934. There has been an attempt to dismiss this highpoint of Soviet cruelty as an economic policy connected with the collectivization of the wheat lands, and the elimination of the kulaks, the independent farmers was therefore necessary. The fact is, however, that large-scale farmers in Ukraine were few and far-between. As a Soviet writer Kossior [error: Kosior was party boss of Ukraine – R.S.] declared in Izvestiia on December 2, 1933, “Ukrainian nationalism is our chief danger,” and it was to eliminate that nationalism, to establish the horrifying uniformity of the Soviet state that the Ukrainian peasantry was sacrificed. The method used in this part of the plan was not at all restricted to any particular group. All suffered – men, women, children. The crop that year was ample to feed the people and livestock of Ukraine, though it had fallen off somewhat from the previous year, a decrease probably due in large measure to the struggle over collectivization. But a famine was necessary for the Soviet[s] and so they got one to order, by plan, through an unusually high grain allotment to the state as taxes. To add to this, thousands of acres of wheat were never harvested, were left to rot in the fields. The rest was sent to government granaries to be stored there until the authorities had decided how to allocate it. Much of this crop, so vital to the lives of the Ukrainian people, ended up as exports for the creation of credits abroad.”

“In the face of famine on the farms, thousands abandoned the rural areas and moved into the towns to beg [for] food. Caught there and sent back to the country, they abandoned their children in the hope that they at least might survive. In this way, 18,000 children were abandoned in Kharkiv alone. Villages of a thousand had a surviving population of a hundred; in others, half the populace was gone, and deaths in these towns ranged from 20 to 30 per day. Cannibalism became commonplace.” 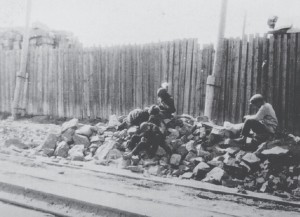 “The fourth step in the process consisted in the fragmentation of the Ukrainian people at once by the addition to the Ukraine of foreign peoples and by the dispersion of the Ukrainians throughout Eastern Europe. In this way, ethnic unity would be destroyed and nationalities mixed.”

“These have been the chief steps in the systematic destruction of the Ukrainian nation. Notably, there have been no attempts at complete annihilation, such as was the method of the German attack on the Jews. And yet, if the Soviet program succeeds completely, if the intelligentsia, the priests and the peasants can be eliminated, Ukraine will be as dead as if every Ukrainian were killed, for it will have lost that part of it which has kept and developed its culture, its beliefs, its common ideas, which have guided it and given it a soul, which, in short, made it a nation rather than a mass of people. The mass, indiscriminate murders have not, however, been lacking – they have simply not been integral parts of the plan, but only chance variations. Thousands have been executed, untold thousands have disappeared into the certain death of Siberian labor camps.”

“This is not simply a case of mass murder. It is a case of genocide, of destruction, not of individuals only, but of a culture and a nation. Soviet national unity is being created, not by any union of ideas and of cultures, but by the complete destruction of all cultures and of all ideas save one – the Soviet.” 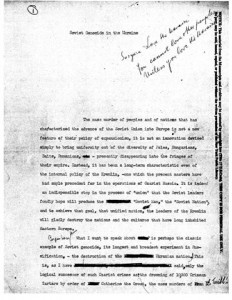 An illegible photocopy of the first page of Lemkin’s speech on the Ukrainian Genocide.