During the twentieth century, colossal human tragedies occurred — among them the Holodomor, the Holocaust, the Srebernica Genocide, the Rwandan Genocide and the genocide of the Yazidis. Our focus here will be the study of a genocide known as “The Ho­lodomor,” a word that in the Ukrainian language means “death inflicted by starvation”.

Millions of men, women and children were slowly starved to death in the early 1930s through the imple­mentation of a policy to take away the food from the largest segment of the Ukrainian nation, the farmers. The term “Holodomor” is often used to encompass the starvation of the farmers as well as a broader assault on the Ukrainian nation, which included an attack on the cultural, religious and political leadership of Ukraine, most of which was at that time under Soviet rule. Thus, the largest non-Russian ethnic group with­in the Soviet Union, the Ukrainians, were decimated, putting an end to their aspirations for autonomy and independence for decades. 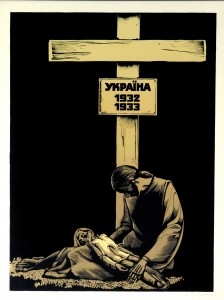 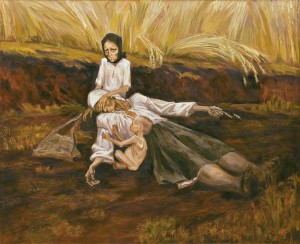 The Soviet regime that conducted this genocide denied its existence and terrorized its own population into silence for generations. Thus, this huge crime nearly disappeared from world awareness. After the demise of the Soviet Union in 1991, archives in Russia and Ukraine were made accessible that for decades had been closed to scholars. Researchers are now able to study documents and materials that confirm the motivations of the Soviet leadership in the 1930s regarding Ukraine and the conduct of its regional leaders during the Holodomor. This has led to a greater understanding of this tragedy, in­cluding its far-reaching consequences for present-day Ukraine.

When: 1932-1933. At the time of the Holodomor, Ukraine was a republic or province of the USSR. After Ukraine’s briefly achieved independence in 1918-1920, Ukraine was conquered by the Red Army and was incorporated into the Soviet Union in 1922.

Who was affected:  the population of Ukraine, mostly farmers and their families.

Who were the perpetrators: The Communist Party of the USSR led by Joseph Stalin.

Where: Ukraine, specifically the territory of central, southern and eastern Ukraine and the Kuban, a territory in southern Russia, adjacent to Ukraine that was heavily populated by Ukrainians.

How:   Through Soviet government decrees:

“The Terror-Famine of 1932-33 was a dual- purpose by-product of collectivization, designed to suppress Ukrainian nationalism and the most important concentration of prosperous peasants at one throw.”

Lasting Consequences of the Holodomor 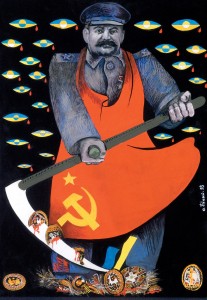 Population Loss – Demographic estimates put the number of excessive deaths at approximately 4,500,000 people in Ukraine in 1932-1934. (O.  Wolowyna)
Direct population losses by starvation in June 1933, at the height of the Famine, were at least 28,000 deaths per day in Ukraine, 30 percent of them children. Many of the documents in Ukraine were destroyed by Soviet authorities and exact numbers are still being determined.

Change in demographics of Ukraine – Among those brought in to settle the abandoned villages and depopulated regions in Ukraine were Russians and Belarusians.

The policy of Russification and denationalization in Ukraine made Ukrainians second-class citizens on their own territory, enforcing a ‘Soviet identity’ and Russian language onto the Ukrainian population.

Loss of collective memory – Ukrainians were denied their own history, culture, and knowledge about the Holodomor for generations. Only since 1991 and the independence of Ukraine have Ukrainians been free to express fully their Ukrainian identity.

Elimination of Ukrainian leadership – 80 percent of the intelligentsia were destroyed in the 1930s and often replaced by Soviet non-Ukrainian officials.

Ukraine is a post-genocidal and post-colonial country – “The Holodomor maimed Ukraine to such an extent that it created a discontinuity in the normal development of the Ukrainian people to this day. The orchestrated famine wiped out millions of nationally conscious Ukrainians. The Soviet regime prevented families and individuals from processing both personal and national grief, as for more than 70 years Ukraine could not address this trauma openly. The problems of today are deeply rooted in the past atrocities, destruction of the spiritual, intellectual and cultural life of successive generations of Ukrainians since the 1930s.  Will acknowledgement by the world community of the Ukrainian genocide ease the effects of the trauma? The Holodomor is not only an event in Ukraine’s past – it is an event in its present and its future.” (Irena Chalupa, Dec. 9, 2008)

Ukraine is still a prime target for Russian expansionist objectives, as is illustrated by the events in Eastern Ukraine.

“Why is the Holodomor unique among genocides and great crimes against humanity? Because its last chapter has not yet been written.”

G Genocide is the destruction of a group or a nation

O Operational and intentional decrees carried out by perpetrators: individuals or governments

C Commemoration of victims of the Holodomor and other genocides

I   Identity may lead to genocide: national, ethnic, racial, or religious, political

E Everyone is affected; both the victims and survivors, as well as perpetrators and bystanders 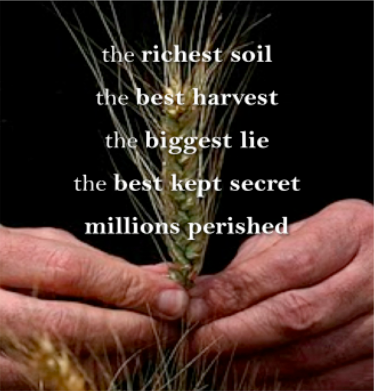 O   Orphans wandering the countryside and cities looking for food

D   Death and destruction in the countryside

O   Oats, wheat, and barley – all taken away by the Soviet government

M  Millions were starved to death