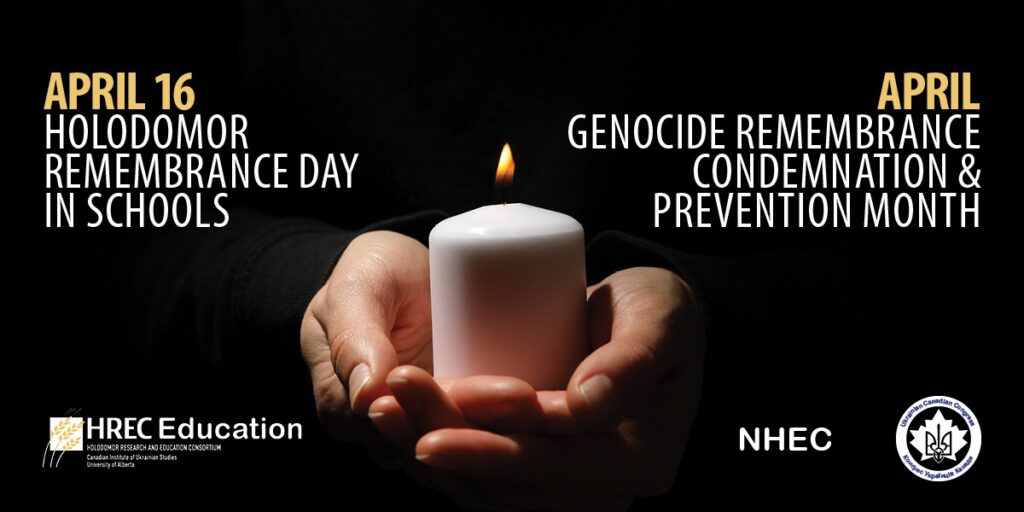 Screen award-winning Holodomor film in your classes in April for free.

In 2015, Canada passed a historic motion to recognize the month of April as Genocide Remembrance, Condemnation and Prevention Month. During this month, we honour the memory of the victims of genocide. Canada has welcomed the survivors of these atrocities and the descendants of those who perished in them.In 2021, the Ukrainian Canadian Congress designated April 16 as Holodomor Remembrance Day in Schools, together with its National Holodomor Education Committee (NHEC) and the Holodomor Research and Education Consortium (HREC). The Holodomor is one of nine global genocides recognized by the Government of Canada and by six of Canada’s provincial legislatures.

It was in the Spring of 1933 that the number of deaths inflicted by the Soviet regime’s forced starvation in Ukraine escalated significantly during the Holodomor’s deadliest year. Because many of the villages had all of their food removed, by Spring there was nothing left to eat. Deaths increased from 12,000 people per day in February to nearly 20,000 deaths per day in April of 1933.

A SPECIAL FREE VIEWING OF THE FILM
HOLODOMOR: VOICES OF SURVIVORS
for use in classrooms
during the month of April

This year for the entire month of April, you are being given free access to view the award-winning film Holodomor: Voices of Survivors by acclaimed Director/Producer Ariadna Ochrymovych, a former National Film Board of Canada Director. This 30-minute educational documentary short film features moving firsthand accounts of 25 Canadian survivors who tell their stories of experiencing the Holodomor as children. Narration throughout provides historical context for the Holodomor. Illustrated with archival photos and footage obtained from Ukraine, and drawings by Canadian artist Iouri Rybalka; music by Myroslav Skoryk; voice-overs by Luba Goy and Franko Diakowsky. This film is appropriate for grades 7 through 12.

As responsible citizens, we make a commitment to commemorate the victims and survivors of these atrocities so that we never lose sight of our collective responsibility to fight prejudice and all forms of discrimination, to prevent hatred from taking root in our communities. Educators are encouraged to take time in April to remember those who suffered and lost their lives in the Holodomor and other genocides, to commit to using education to protect and defend human rights and dignity everywhere, and to stand up against all exclusionary practices that are known precursors to crimes against humanity.

For additional information about the Holodomor please visit the
HREC Education website: education.holodomor.ca

Featuring a special presentation about the importance of this day during April Genocide Remembrance, Condemnation and Prevention Month by Valentina Kuryliw, head of the Ukrainian Canadian Congress National Holodomor Education Committee, and author of Holodomor in Ukraine: The Genocidal Famine 1932-33: Learning Materials for Teachers and Students.

We will also feature a screening of the film Holodomor: Voices of Survivors with acclaimed Director/Producer Ariadna Ochrymovych, former National Film Board of Canada Director.
TO REGISTER FOR THIS FREE ONLINE EVENT:
https://zoom.us/webinar/register/WN_89bmPJHbSX-lX4i1Bs_dMw

UCC Link and registration for event