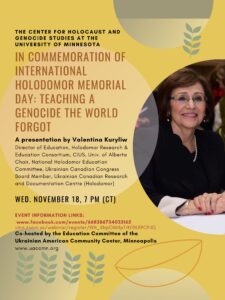 MINNEAPOLIS, MN – on November 18, 2020, the Center for Holocaust and Genocide Studies (CHGS) at the University of Minnesota and the Ukrainian American Community Center (UACC) of Minneapolis invited author, educator and advocate of Holodomor teaching and education Valentina Kuryliw to give a talk in commemoration of International Holodomor Memorial Day.

CHGS Outreach Coordinator Joe Eggers, the evening’s moderator, opened by acknowledging the strong relationship between the Center for the Holocaust and Genocide Studies with the Ukrainian American Community Center. He emphasized, “For over two decades a cornerstone of our Center’s mission has been education – providing sources and information to give teachers the ability to impart lessons from difficult pasts. This event is the first commemorating the Holodomor at the Center for Holocaust and Genocide Studies.”

Luda Anastazievsky, the Ukrainian American Community Center’s programming Director and Chair of the Holodomor Education Committee, expressed the Ukrainian Community’s gratitude to Eggers and CHGS Director Alejandro Baer, for the opportunity to share knowledge of the Holodomor with educators and the public. She welcomed Valentina Kuryliw and stressed the importance of this talk for the Ukrainian Americans in Minnesota whose history is neither equitably represented nor drawn upon for important lessons on human rights in the Minnesota secondary school curricula. Luda drew attention to the fact that Genocide Studies are not part of Minnesota Social Studies curriculum and expressed a hope that the Holodomor and other genocides will be included in high school courses throughout the state.

Valentina Kuryliw’s long and passionate advocacy embodies the old adage that “to get anything done you have to wear many hats.” Kuryliw is the Chair of the National Holodomor Education Committee of the Ukrainian Canadian Congress, the Director of Education at the Holodomor Research and Education Consortium, a project of the Canadian Institute of Ukrainian Studies (CIUS) at the University of Alberta, a Member of the Board at the Ukrainian Canadian Research and Documentation Centre, and the former co-chair of the Holodomor Education Team in Toronto, Canada.

In her talk, In commemoration of International Holodomor Memorial Day: Teaching a Genocide the World Forgot, Kuryliw opened with information regarding the status of the Holodomor today, including recent incidents of denial this past summer and fall in Canada and Ukraine. She then gave a brief overview of basic facts about the Holodomor in her PowerPoint presentation and screened a short video about her family history in the 1930s, which she intermingled with information about the history of the Holodomor since both of her parents were survivors of the Holodomor. Her father also survived the Belomor Canal concentration camp where he was sent because he was the son of a kurkul. It is her family background that motivated her to begin the advocacy work she has dedicated herself to in Holodomor education. Valentina made it clear that to be successful at it she has had to wear many hats in Holodomor advocacy, teaching, promotion, resource development, teacher training and more – each of these roles supports the other for the whole project of Holodomor education within regular classroom curricula to make progressive headway. As Lesia Semeniuk, a community activist watching the presentation from Toronto, Canada stated: “I particularly appreciated hearing about all the work Valentina has done over the years, the significant progress made and the tremendous impact she as an individual has had and continues to have.”

Kuryliw also outlined some of the challenges she has had to face to get the Holodomor acknowledged as genocide, to set up a Holodomor Memorial Day in schools in Canada on the fourth Friday in November and to have it included in school curricula in her home province of Ontario, and to facilitate its inclusion in curricula across Canada. The event organizers had invited her to share advice and give suggestions from her experiences for overcoming the challenges of getting the Holodomor into the curriculum with examples of some successful outcomes. She stressed that her approach in teaching the Holodomor comes from a human rights and genocide perspective reflective of the democratic values in Canada, the United States, and now Ukraine. In her presentation she emphasized the fact that not only is it important to provide teaching materials on the Holodomor that are factual and verifiable, but also to use strategies and methodologies that are current and that engage students directly in the learning process. “Many teachers will only teach a topic if it is interesting to them and they are given readily available materials that have clearly defined strategies with which to teach it,” Kuryliw stated.

Luda Anastazievsky stated that, “Raising awareness of the Holodomor and empowering Minnesota educators to teach its history and importance to human rights is the Holodomor Education Committee’s mission. This excellent presentation is indispensable to achieving this goal.” Minneapolis community activist Walter Anastazievsky added, “Today more than ever we need to learn from tragic examples in history such as the Holodomor, how the erosion of human rights can lead to the horrors of genocide. The Holodomor Education Committee will be well-equipped with the roadmap and the tools you’ve provided for raising awareness, advocating and teaching the Holodomor.”

This presentation, given in commemoration of the 87th anniversary of the Holodomor, was for educators, community activists and the community at large. Over 160 participants attended the talk via Zoom online.

We are committed to providing accessible information. If you need alternate formats, please contact us.