The First Western Journalist to Expose the Holodomor. 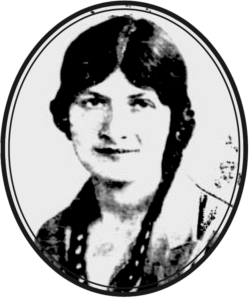 “The villages were strangely forlorn and deserted… The houses were empty, the doors flung wide open, the roofs were caving in…

When we had passed ten, fifteen of these villages I began to understand. These were the homes of those thousands of expropriated peasants — the kulaks…”

Rhea Clyman became the first western journalist to witness and report on the starvation in Ukraine, making a journey by car in September 1932 through the agricultural heartland of the Soviet Union (USSR) during the Holodomor. She previously spent a month travelling in the Soviet Far North, where she encountered Ukrainians who had fled from famine conditions in their homeland or who had been exiled and were being ruthlessly exploited as slave labour. Her accounts of her two trips were published in 44 feature articles in the Toronto Telegram newspaper between September 1932 to June 1933. Of these, 21 were front-page stories. 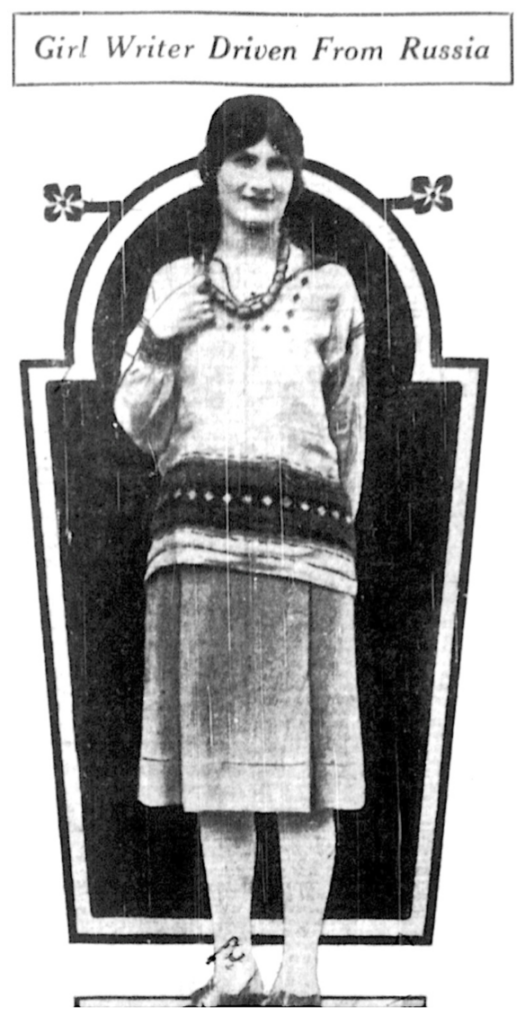 She arrived in Moscow in late December 1928. Many newspapers sent journalists to the USSR for short stints, but Rhea became fluent in Russian and established herself as a freelance correspondent with a distinctly independent point of view.

In the late summer of 1932 Rhea Clyman travelled by car south from Moscow to Kharkiv – then the capital of Ukraine – through the North Caucasus region, past Stalin’s birthplace in Gori, Georgia to “Tiflis” (Tbilisi), Georgia. Along the way she passed through the southeastern Ukrainian cities, towns, and villages of: “Izoum” (currently Izium), “Slavnsk” (Sloviansk), “Artemowsk” (Bakhmut), “Gorlova” (Horlivka) and “Stalino” (currently Donetsk) before going on to Rostov, the Don Cossack region, and Krasnodar in the Kuban, and then on to “Tiflis.” (see Rhea Clyman’s travel map).

Rhea Clyman left Canada for the Soviet Union initially sympathetic toward the equitable society that the Bolsheviks had promised to create at the outset of Stalin’s first Five Year Plan (1928). But her enthusiasm for the “Great Soviet Experiment” waned as she began to comprehend the scale of injustices and state-sponsored terror the Communist dictatorship was inflicting on its citizens. She began expressing a more critical attitude toward the Soviet government in two articles she had published in Maclean’s magazine in the spring of 1932.

In June she made an unauthorized visit to the White Sea port town of Kem, closed to foreigners, to investigate if political prisoners and exiles were being used as slave labour in the forestry and mining industries and to build the nearby Belomor or White Sea Canal.
She wrote five articles that she managed to get out of the country without Soviet censors being able to screen them, and which were published in London’s Daily Express in late August and September of 1932. These articles angered Soviet authorities because she described the exile of “many thousands of kulaks… to the north since the collectivization of agriculture began.” Working in horrific conditions, large numbers of them were from Ukraine, she stated.

Rhea Clyman understood that if her articles were too critical of the Soviet government, they would not pass censorship and could jeopardize her ability to stay in Russia. Nonetheless, weeks later, increasingly disturbed by what she saw happening, she left by car on an ambitious road trip with two female companions determined to see what conditions were like in the “Famine-lands,” as Rhea called them, of Soviet Ukraine and the country beyond Moscow.

Aware of the challenges of such a trip, Rhea Clyman was committed to learning the truth about what was happening in the countryside and to finding out how ordinary Soviet workers and peasants (farmers) were being treated after 15 years of Communist rule.

“The villages were strangely forlorn and deserted. I could not understand at first. The houses were empty, the doors flung wide open, the roofs were caving in. I felt that we were following in the wake of some hungry horde that was sweeping on ahead of us and laying all these homes bare. I wanted to go back and look, but there was something in the stoical abandon of these homes that [blot on original -terrif?]ied the intuition of a stranger. When we had passed ten, fifteen of these villages I began to understand. These were the homes of those thousands of expropriated peasants ― the kulaks ― I had seen working in the mines and cutting timber in the North.”

In Kharkiv, Rhea first reported seeing signs of the famine in Ukraine:

“We had been two days in Kharkov [sic, Russian spelling], but we were all anxious to get away. The great Ukrainian capital was in the grip of hunger. Beggars swarmed round the streets, the stores were empty, the workers’ bread rations had just been cut from two pounds a day per person to one pound and a quarter.” 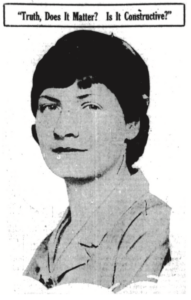 In the Ukrainian village of Isoomka, villagers asked her to take a petition back to the Kremlin on their behalf and that of the surrounding villages:

“Tell the Kremlin we are starving; we have no bread! We are good, hard-working peasants, loyal Soviet citizens, but the village Soviet has taken our land from us. We are in the collective farm, but we do not get any grain. Everything, land, cows and horses, have been taken from us, and we have nothing to eat. Our children were eating grass in the spring…

I left this village with the determination that their petition should not only be heard in the Kremlin, but by the rest of the world also. Stalin was building Socialism in one country, and peasant children were eating grass outside the doors of his Socialist cities.”

Written by Rhea Clyman about the Holodomor

When reading Clyman’s articles, and those by other journalists of this time period, it is important to note that:

Please be aware of these as you read the articles.

Use for educational purposes. Other reprints by permission of the author.