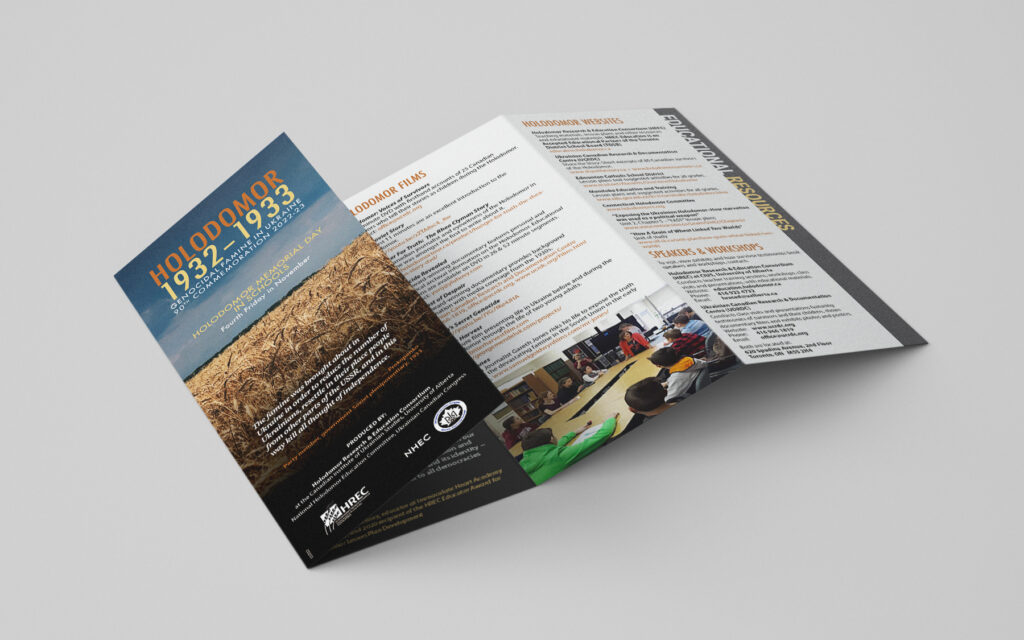 The famine was brought about in Ukraine in order to reduce the number of Ukrainians, resettle in their place people from other parts of the USSR, and in this way kill all thought of independence.
- Prokopenko Party member, government Soviet plenipotentiary, 1933

Produced by the Holodomor Research and Education Consortium at CIUS–University of Alberta, and the National Holodomor Education Committee of the Ukrainian Canadian Congress.

“I’m starving – let’s get something to eat.”

We hear expressions like this often, but the truth is we are not starving, we’re just hungry. There’s a di°erence. Between 1932 and 1933 millions of Ukrainians were forcibly starved to death by Joseph Stalin’s brutal plan to restructure the Soviet Union – a plan that included destroying the Ukrainian population by removing the food they had grown. Ukrainian farmers were singled out and bullied into turning over their farms to the state, which was called collectivization. Those who refused – were killed on the spot. The Soviet regime also imposed impossible quotas for wheat and forcibly took from families even the smallest of means by which they could survive. The Law of Five Stalks of Grain, passed in 1932, stated that anyone caught taking miniscule amounts of grain from a collective farm could be shot – even children. It is impossible to calculate the misery of the, at least, 4 million people who were starved to death as they watched their mothers, fathers, siblings, and children slowly die around them. To this day, Russia denies that this genocide known as the Holodomor occurred. The persecution of Ukrainians under Russian rulers is nothing new, however. Over the last 350 years, Ukrainians have had their intellectuals imprisoned or killed and their language and cultural practices banned. They have seen those who crave power attempt to erase their identity as a Ukrainian people; and yet, they have survived and thrived.

2022-2023 marks the 90th Commemoration of the Holodomor. In 2022, as Russia attempts to assert its will over their proud and independent nation, Ukrainians are once again facing genocide through Russian destruction of their population. This Holodomor Memorial Day, let us remember the millions who su°ered and died at the hands of Stalin’s cruel Soviet dictatorship. Let us also remember the 42 million courageous Ukrainian citizens now living in Ukraine, and the millions more who form the Ukrainian diaspora throughout the world. Let us stand with them in solidarity in our schools, in our communities, and with our governments. Let us remember that the oppression and destruction of a single democratic nation and its identity – of Ukraine and its people – is a threat to all democracies throughout the world.

Teaching materials, lesson plans and other resources and educational materials. HREC Education is an Accepted Educational Partner of the Toronto District School Board (TDSB)
education.holodomor.ca

Lesson plans and suggested activities for all grades.

“How A Grain of Wheat Linked Two Worlds” Unit of study

Conducts class visits and presentations featuring testimonies of survivors and their children, shows documentary ÿlms and exhibits photos and posters.

Kat was inspired to write the book after discovering her grandfather’s farewell gathering before they left Ukraine in 1928. It consists of their extended family in Ukraine, and she weaves stories of each of them based on her research, including accounts from the mouths of survivors. An excellent and gripping read for students in the West who may wonder what befell the families that were left behind and experienced the Holodomor.

Valentina wrote the book based on her mother’s diary and describes how in the early 1930s tactics of deliberate starvation and denial of basic rights were used to force the people of Ukraine to surrender to the Stalin regime. The story is told through the eyes of a young, orphaned girl who witnessed the brutal results of that regime. It illustrates the fragility of human rights and how they can be obliterated by corruption and power, yet it is a very accessible and an exciting read for both students and adults.

by B. Klid & A. Motyl, Edmonton: CIUS Press, 2012 A collection of key texts and materials. 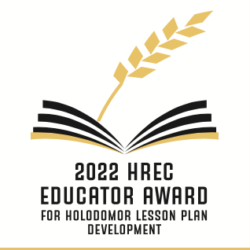 The annual HREC Educator Award for Holodomor Lesson Plan Development is intended to foster the development of innovative, creative and interactive lessons for grades K-12 that develop critical thinking skills while addressing the topic of the Holodomor, and to recognize the outstanding educators who create them. The winning lesson plans will be posted on the HREC Education website.

This year’s applications must be submitted by May 1, 2022.

The Bitter Memories of Childhood monument by Ukrainian sculptor Petro Drozdovsky was unveiled in October 2018 for the 85th Commemoration of the Holodomor in Ukraine. The statue depicts the most vulnerable of the Holodomor’s victims and provides an opportunity for student re ̨ection.

Located just inside the Princes’ Gate entrance of the Canadian National Exhibition (CNE) grounds, the memorial site includes a pathway through a small park leading to 3 millstones, each of which provides QR code information about the Holodomor, and the statue. Students can re ̨ect on the history, survivor testimonials and legacy of the Holodomor.

For more information on this and other monuments, visit: education.holodomor.ca/introduction/holodomor-monuments/

The Ukrainian Canadian Congress designated April 16 as HOLODOMOR REMEMBRANCE DAY IN SCHOOLS, together with HREC and UCC’s National Holodomor Education Committee (NHEC). Because April 16, 2022 falls on a Saturday, Holodomor Remembrance Day in schools will be held on April 19.

The Holodomor is one of nine global genocides recognized by the Government of Canada and by six of Canada’s provincial legislatures. It was in the Spring of 1933, during the Holodomor’s deadliest year, that the number of deaths escalated significantly.

Canada has been affected by many genocides and recognizes:
the Armenian Genocide, Ukrainian Holodomor, Jewish Holocaust, the Genocide Against the Tutsi in Rwanda and the Genocide in Bosnia. The Canadian Parliament has also recognized the ongoing genocide being committed against the Yezidi in Syria and Iraq today, the Rohingya
in Myanmar, the Romani during WWII, and currently the Uyghurs in China.

Educators are encouraged to take time in April to remember those who suffered and lost their lives in the Holodomor and other genocides, and to commit to using education to protect and defend human rights and dignity everywhere. 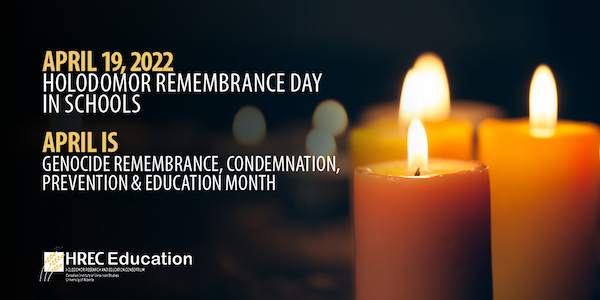