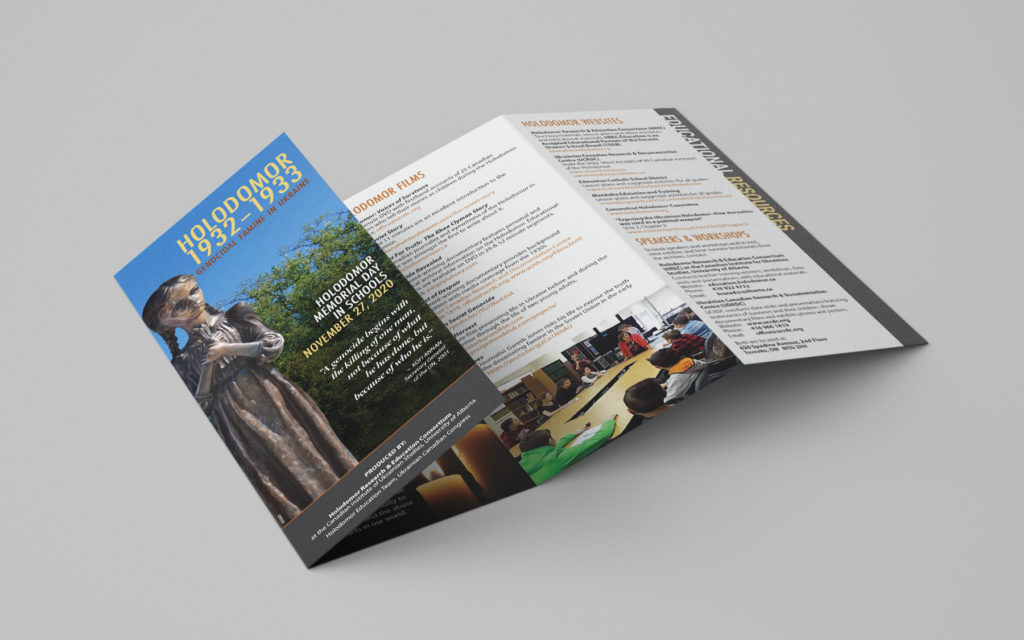 Worldwide, outside of schools, Holodomor Memorial Day is on the 4th Saturday of November.

Today we remember the victims and survivors of one of the darkest chapters in human history. In 1932 and 1933, under the leadership of Joseph Stalin, the Soviet Union deliberately created a devastating famine in Ukraine. At least 4 million people died of enforced starvation during the Holodomor, meaning extermination by starvation.

Canada designates the 4th Friday and Saturday in November as Holodomor Memorial Day to commemorate the Ukrainian genocide. It is remembered as an attack on Ukrainian identity and culture. 85% of the Ukrainian population were village farmers who were targeted for destruction. Brigades of Communist activists were ordered to go from house to house in the villages to confiscate grain and all other foodstuffs to fulfill impossibly high grain quotas imposed by the Soviet government. They even used special metal rods to probe the ground and potential hiding places where they suspected grain could be hidden. Beginning in 1933, measures were additionally introduced to stop Ukrainian farmers from leaving their villages in search of food. This condemned millions of people in Ukraine to a slow and agonizing death by starvation.

The results were devastating. In the world’s most fertile farmland, nothing was left to eat. People caught rats, frogs, earthworms, made tree bark pancakes and pinecone soup, ate grass and roots. Meanwhile, grain stocks and other food taken from the villages were exported to pay for Stalin’s Five Year Plan of industrialization. Some grain rotted by the ton within sight of families starving to death. Those who resisted were shot, sent to the gulag, robbed or thrown out of their homes. Even children were executed for trying to pick up a few loose stalks of grain in the fields. 28,000 people died per day at the height of the Famine in June of 1933. 31% were children under the age of 10.

Let us take a moment to remember the victims of the Holodomor. Let us also reflect on the actions we can take daily in our school and our communities to combat genocide and the abuse of human rights in our world.

Lesson plans and suggested activities for all grades.
www.ecsd.net/AboutUs/Overview/Holodomor

by B. Klid & A. Motyl, Edmonton: CIUS Press, 2012 A collection of key texts and materials.
www.ciuspress.com/catalogue/history/324/the- holodomor-reader

Canada has been affected by many genocides and recognizes: the Armenian Genocide, the Ukrainian Holodomor, the Jewish Holocaust, the Genocide Against the Tutsi in Rwanda and the Genocide in Bosnia. The Canadian Parliament has also recognized the ongoing genocide being committed against the Yezidi in Syria and Iraq today, the Rohingya in Myanmar and the Romani during WWII.